We drew a blank on Saturday in terms of dolphins but another great extended bay explorer trip this morning as we were given a great show at Mwnt by at least a dozen dolphins. Hopefully some photos later but here is one from last Thursday. 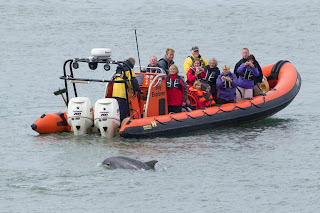 Dolphins on 3 out of 5 trips today. On the 1st tri a group of 3-4 at mwnt gave a great show, then on the next a fleeting glance of a solitary dolphin. The 3rd trip produced 15 if not more and then we drew a blank on the last 2. Plenty of seals at cemaes head but no pups yet.

The tide kept us in until 15:30 today by which time the NW wind had picked up a little. Even though it was quite rough in places, we had not a bad day for sightings with apx 10 dolphins spread over 2 of the trips plenty of seals and also another sunfish.

Dolphins on 6 out of 8 trips yesterday (Tuesday) plus another sunfish. Managed to dodge most of the showers today (Thurs) and were rewarded with dolphins on 5 out of 5 trips 🙂

It was hard work finding dolphins yesterday with sightings on only 2 out of 7 trips. Today has started a lot better with 3 out of 3 so far.

Here is a great shot taken on one of last weeks trips by Kat from Seawatch. 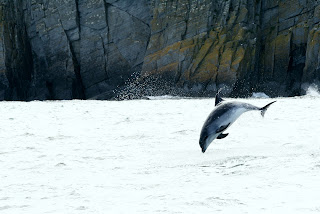 Great dolphin sightings in yesterday evenings trips. The wind calmed down nicely and we saw dolphins on all trips again.

We drew a blank in terms of dolphins on Saturday & on Monday with the weather hampering our efforts. It looked like we were going to do the same yesterday until our last trip at 18:45 when unexpectedly a mother and her calf popped up right underneath the Cliff Hotel. We watched them for a while and then carried on to find 3-4 more dolphins inbetween Cardigan Island & Mwnt. One was a dolphin called "Nippy" that we see on a regular basis. On the seal front, we saw a few seals dotted around on the earlier trips however as the wind died down during the later part of the day we were able to get around cemaes head where approximately 20 seals were hauled up on the beach plus a similar number in the water.

Last week was brilliant for sightings with 100% success on Wednesday, Thursday & Friday. That ended on Saturday buy we're not complaining. Some of our regulars were sighted including "top notch" with her calf & another called "nippy". We had Sea Watch onboard for the 1st couple of trips on Friday who brought their flag allowing us to gently approach the dolphins we saw. That gave passengers some amazing close up encounters. Sea Watch will be back onboard on a regular basis during August and will also be collating all of our sightings data for the summer. Lets see what this week holds (apart from rain!).